Bus trips will depart at the following times:

Thursday 6 October 2005
On the last day of the Symposium it is possible to ride in the MicroCab Taxi, F-cell A-class Mercedes and Daimler Chrysler bio-diesel vehicle. Tours will depart at the following times:

How the hydrogen and fuel cell companies are doing

Posted by ben @ 10:32 PM | Permanent Link
I've been tracking a number of energy companies on the stock market since January and thought I'd share how they've been doing. I organize them into sectors: Hydrogen and Fuel Cells, Wind Power, Photovoltaics, Biomass, Coal Power and Oil & Gas. Below you'll find how each of these sectors are doing compared to each other. The y-axis is the total stock price of the index divided by the stock price of the index since January 7.

Not surprisingly, the fossil fuel sector is doing the best, the coal power companies are actually beating the oil & gas sector. Out of the renewable energy technologies, wind power is the best followed by the photovoltaic industry, then the hydrogen and fuel cell industry and finally the biomass industry.

The next figure shows how the hydrogen and fuel cell industry is dong compared to the total market indicators (Dow + Nasdaq + S&P 500) and also the entire energy sector (accumulation of all the energy sectors in the above figure).

The hydrogen and fuel cell sector closely follows the market indicators. I was at a a green energy conference a few weeks ago and there was a business professor tracking the same thing and he concluded that investors don't perceive the hydrogen and fuel cell industry to be energy related, they perceive it to be more technology related and that's why it follows the market indicators more so than the true energy companies.

Posted by ben @ 10:21 PM | Permanent Link
Toshiba says that they will release a direct methanol fuel cell in 2007 that can power an iPod for an additional 2.5 days without requiring a methanol refill. The fuel cell will be shown at the CEATEC Japan 2005 trade show this October. Toshiba's fuel cell will produce 100-milliwatts and is similar in shape and size to a pack of gum, their 300-milliwatt version is the size of a pack of playing cards. Toshiba still doesn't know if they will design the fuel cell to allow methanol refills or if it will be disposable. This will depend on the findings of the International Electrotechnical Commission, which is reviewing a draft of safety standards based on international standardization specifications for micro fuel cells. I doubt that these products will ever be made available if the methanol cannot be refilled. 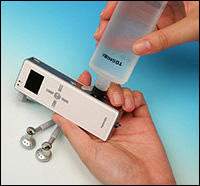 Refilling the Toshiba DMFC with methanol

Another thing that must be considered with these products: Most companies for portable electronics have their own battery design. I doubt very much that these companies will accommodate a fuel cell made by Toshiba in their electronics. Hopefully market demand will force these electronics companies to license out the best DMFC technology. Either way, I wouldn't expect these fuel cells to be mainstream for a couple of years, they will probably be held back by logistics even though the technology is available.

Toshiba's 100mW fuel cell is in the Guiness book of world records as the world's smallest fuel cell. Also interesting to note, Toshiba has also developed a Li-ion battery that is able to charge to 80% capacity in only 60s.
5 comments

Posted by ben @ 8:15 PM | Permanent Link
A company started by researchers from the Technical University of Denmark in Lyngby (north of Copenhagen) claim to have a hydrogen storage material that surpasses the Department of Energy's goals for the year 2015. The solid state hydrogen storage that they call AMMINEX reportedly holds 9.1 wt% H2 (DOE goal for 2015 is 9.0 wt%), it has a volumetric density of 0.11 kg H2/l (DOE goal for 2015 is 0.081 kg H2/l) and it has an energy density of 13.0 MJ/l (DOE goal for 2015 is 9.72 MJ/l). The reaction to produce H2 with this material is reversible, it has fast kinetics so that it can generate H2 on demand and it is apparently made from cheap materials.

This work was published on sept 7, 2005 in the Journal of Materials Chemistry. The hydrogen storage system is based on metal ammine complexes, they tested Mg(NH3)6Cl2. This material is a salt that can be compacted into a pellet to obtain a high volumetric density. At elevated temperatures, between 77-347C, the ammonia (NH3) is released and it is fairly simple to produce H2 and N2 from that released ammonia. The solid state hydrogen storage is completely reversible, meaning that the depleted salt MgCl2 can easily be regenerated into Mg(NH3)6Cl2. This is how the process works:

From the article: "The only drawback is that metal ammine complexes deliver hydrogen in the form of ammonia. This can be used directly as fuel for a solid oxide fuel cell without further reaction."

There wouldn't be much point in using this system to run a solid oxide fuel cell though because SOFCs are primarily used for stationary applications and the ammonia might as well be trucked to the location of the SOFC instead. Hydrogen storage is mostly required for polymer electrolyte fuel cells (PEMFC) that most people think will pwer their cars some day.

This hydrogen storage material though only releases hydrogen with an energy input of 43KJ/mol (to releases the ammonia) + 32KJ/mol (to convert ammonia into hydrogen) = 75KJ/mol. Although the PEM fuel cell reactions are exothermic (meaning they give off heat) there would not be enough heat released by these reactions even if the PEM fuel cell was operating at 700C, which it can't because of material constraints.

Where the "required" column is the energy required to extract hydrogen from this hydrogen storage technique after using the waste heat generated by the fuel cell and the "% of H2 energy content" column is how much energy would be taken away from the hydrogen due to the fact that energy must be put into the system to release the hydrogen.

So what this means is that if the PEM fuel cell could operate at 300C (which it can't at the moment), then this hydrogen storage system would reduce the energy content of the hydrogen that it produces by 19%. Much better than liquefied hydrogen which requires about 50% of the energy content of hydrogen. But I think that the PEMFC as it is today is dead, because it has to be able to operate at elevated temperatures to minimize the energy losses of these hydrogen storage technologies.